Rhayne
Sale!
from $19.95 $19.95
This item is currently on backorder but you can still purchase it now and we'll ship as soon as more become available.

Kumarahou is known to be a blood purifier and a tonic for the liver.

Kumarahou may assist with the following

Approximately 1 teaspoon of kumarahou added to a pot of boiling water.

Allow to boil (don't use a microwave!) for 1 minute and then simmer for 10 minutes, the liquid will turn a yellow/golden colouring - almost like honey.

We will let you into a little secret - it doesn't taste great on its own!  however, we suggest mixing it with honey or raw brown sugar.

Drink 2 cups a day for a full week and then each alternative week.

Kumarahou is sold in 30 gram packets of dehydrated leaves, enough for 3 month’s supply and approved for export from New Zealand to most countries.

Store in a cool dry place away from direct sunlight.

Making Wairakau, the rongoa, is an excellent way of extracting important antioxidant substances such as flavononids and polyphenols, glycosides, antimicrobial tannins, mineral salts and some vitamins (such as niacin and B12, which are not affected by the heating process), in their most absorbable forms. 5 are Native to NZ. FAMILY: Rhamnaceae Buckthorn family.

excellent product , fast efficient service, great price, keeps well, good shelf life, recipe wairakau ,Prior to harvesting your plant material and again before making your rongoā, offer a quiet karakia to acknowledge Tāne’s gift and the purpose for which it was harvested.Cover your kūmarahou leaves with cold water, use all parts of the shrub, bark and fibre leaves seeds and twigs (about 1.5 litres) in a stainless steel pot. Bring this to the boil and simmer gently for 15-20 minutes. Remove the pot from the heat and strain plant material from the water using a clean cloth or muslin. This water is your wairakau. Once the liquid has cooled you can store it in the fridge until needed. Return the spent plant material/leaves to Papatūānuku. Never discard your used leaves in the rubbish.
Dosage: Mix half a cup of cold decoction with half a cup of hot water. Drink 2-3 cups each day (the taste gets better as you get used to the initial kawa bite of the first mouthful).you can use honey and or sugar, gentle on kids and elderly. Aotearoa Maori Rongoa Whanui

T
T.W.
I will endorse all Products

Pomaderris kumeraho. Kūmarahou. Main reference.
FAMILY: Rhamnaceae Buckthorn family
BOTANICAL NAME: Pomaderris spp, especially Pomaderris kumeraho. Also P. hamiltonii, P. prunifolia var. edgerleyi
PREVIOUS NAMES: Pomaderris elliptica. (Williams 1971 gives P. elliptica as name for kūmarahou. P. elliptica is Australian species, found in NSW, Victoria, Tasmania. )
MĀORI NAME: KŪMARAHOU, pāpapa
COMMON NAME: gumdigger's soap; poverty weed; golden tainui
MEDICINAL: Leaves- boiled. Liquid a relief for all chest troubles - coughs, colds, bronchitis, pulmonary tb - taken internally. Beneficial effect on kidneys, in cases of heartburn (Adams 1945).
Leaves boiled, steeped in water, fluid used to relieve asthma and bronchitis (White 1887, Faulkner 1958).
Use for chest ailments suggested during World War II. Value doubted by some. (Wall, Cranwell 1943).
An excellent blood purifier; said to be effective in the cure of bronchial and tubercular complaints. I heard recently of someone using it for diabetes, with good effect. It is interesting to note that none of the other Pomaderris have medicinal properties. (K. Pickmere 1940). Recipe and doses for infusion for asthma and chest complaints. Also consumption (kohi). Put a good handful of dried leaves and young shoots into a billy. Well cover with water and boil until the liquid is a dark brownish-red. Strain and bottle. For a cough, take a teaspoonful, mix with water. For asthma, 2 tablespoons. Take 2 or 3 times a day. Sometimes sugar or peppermint added to improve the taste. Sometimes used as a bath, said to be good for the skin, especially for little children. (P. Smith 1940).
Infusion drunk as a tea for asthma (S. Neil 1941)
Kūmarahou is packed as such, and appears to contain a glucoside which is of benefit in pulmonary complaints (Given 1940)
Decoction of leaves highly valued for all chest complaints and is a mild laxative (Mason 1950)
Brooker, Cambie and Cooper 1987 state that kūmarahou mixed with other herbs, particularly koromiko, was marketed by Rev. E. Ward (1863-1934) under the name `karanui' and claimed to be a specific for tuberculosis and asthma. An ointment made from kūmarahou was sold in Auckland for skin cancer, and used as a medicine at Te Kao many years ago. Related pharmacology (ibid.).
CHEMISTRY: Chemical compounds in leaves investigated by Cain and Cambie 1959.
TRADITIONS: When kūmarahou in flower, near time to plant kūmara (Matthews 1911, Anderson 1954)
Kūmarahou is the kūmara of Raro (See Best 1903). 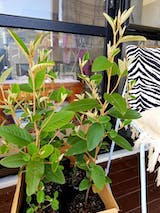